Ahmsta Kebzeh is an ancient spiritual tradition which has been preserved in the Caucasus Mountains. It is an applied science of processing the human being. The process is that of awakening and developing latent human faculties under divine grace and guidance. 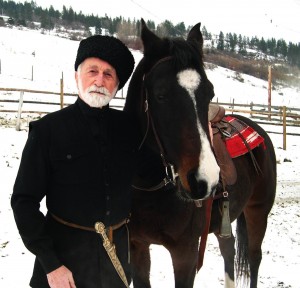 The word Kebzeh has a meaning more comprehensive than the word tradition: it could be translated as the knowledge of the art of living an abundant life. Ahmsta Kebzeh is an oral teaching which has been passed on through story, song, and the way of being of the people who carry it. Never before has it been put into print.

A group of North American people began to work closely with Murat Yagan in 1975. The transmission of the essence of the teaching of Ahmsta Kebzeh, including its practical application, has been achieved through lectures, seminars, workshops, evening classes, and casual conversations while working and socializing. Many of these talks were recorded and have been transcribed.

The Kebzeh Foundation arrives at decisions through consensus. The process was adopted from the Kebzeh Tradition. Each committee or department has a coordinator or head, who assumes responsibility for the functioning of that area.

We make everything available to those who sincerely seek, but we do not attempt to convince or encourage anyone to join us or to stay. People come and go as they wish. It is forbidden to interfere with anyone’s free will. We do not seek to convert, but to complete.

The essence of the Teaching is the response of the aspiration of human beings to better themselves and to better all of life on this globe, bringing it to a state of peace, harmony and oneness, wherein creativity flourishes.